You might find many mushrooms in your garden that look like flowers. Some of these fungi species include pink oysters, green elf cups, and orange peel fungus.

Have you come across a flower that you can’t remember planting? It might actually be a mushroom in disguise.

Several species grow to look like they have petals and other flower traits, so keep reading to learn more about them.

Plenty of mushrooms can look like flowers. However, any common mushroom can also look like a flower when it splits due to releasing spores or dryness from a drought.

There are so many fungi out there that many will appear to look like flowers. However, there are ways to tell the differences between them.

Pink oyster mushrooms grow in areas with high humidity. They feature a bright coral color and petal-like shape, so many assume they’re flowers. The mushroom is beautiful and can look very similar to peonies.

It’s very rare to find one in a garden since they need particular conditions to grow, including humidity and dead wood. Although, gardeners who use wood chips, coffee grounds, and other organic materials in their gardens can find them growing from time to time.

These mushrooms are also edible, so you can stir fry, roast, or boil them. However, you’ll always want to be positive that you’ve identified the mushroom correctly before eating it.

Overall, these mushrooms grow very quickly and are quite stunning. Consider yourself lucky if you find this flower look alike in your garden!

Have you considered growing your own? why not check out your very own growing kit… 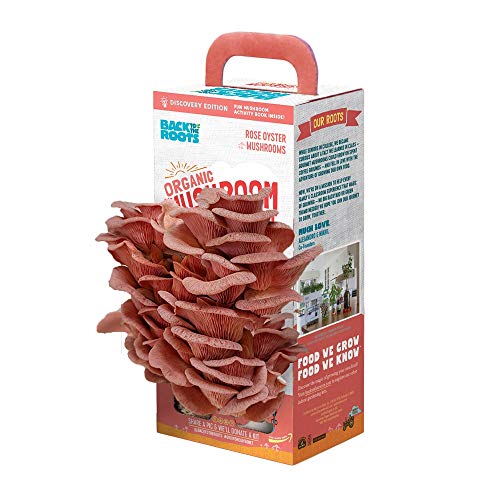 Next, you might see green elf cups. These mushrooms look like bright blue-green flower petals, which makes them stand out.

They have a cup shape and can sometimes look like other types of foliage. At a distance, they can look like scattered violets or leaves.

These mushrooms grow in the fall and summer in the Northeast states and are common in Pennsylvania. They can appear if you have some shady spots in your garden and use wood chip mulch or moss. This fungus loves hardwood, so oak woodchips are most likely to attract them.

Green elf cups are very pretty and can grow in some Northeastern gardens. They are tiny and resemble petite flowers.

Orange peel fungus grows throughout North America and prefers to live on the ground, so they’re commonly confused with flowers. Their bright orange color and petal-like causes them to look like posies, especially from far away.

The fungus starts with a cup shape but becomes more curved over time, making the ends of the mushroom look more like flower petals.

The fungus is very common in America, so it can appear in gardens. They prefer dark, damp places, so shady gardens are much more likely to have them.

In short, the orange peel fungus looks very much like a flower. It’s often confused with orange lilies, tulips, and king zinnias. Their color is nearly the same, and they can share a similar shape with these flowers.

The candle stick fungus has a unique shape that makes it look like a flower. It features a black stem with a white tip that can look like a closed petal.

If the mushroom grows out of the ground, it can look like a tiny white flower. The fungus can also grow in larger clusters, which look more like a group of petals on the ground.

This mushroom also loves rotting wood, so those who use wood chips are more likely to find them.

However, you may want to remove them from your garden as they can cause root rot in some plants. For most gardeners, seeing candle stick fungus is not a big concern.

Next, the amethyst deceiver can look like a purple flower. They grow on the ground and have many ruffles on top that look similar to petals.

The fungus starts flat on top, giving it a distinct mushroom shape, but it changes as it matures. Many people also compare its shape to amethyst crystals.

These mushrooms grow in areas on the eastern side of the Rockies. They also like conditions with a lot of decaying leaves.

It’s important to note that while this mushroom is safe to eat, it looks like many other poisonous species. To be safe, you shouldn’t try to eat them.

The Texas star fungus is another mushroom that can look very much like a flower. It’s very rare and appears only in Japan and Texas.

However, gardeners in those areas could still find them on their property. It’s very rare, but mature versions look like petals on the ground in the shape of a star.

It’s usually a dark brown or orange and can have four to seven “petals” when releasing petals. Most of the time, it’s partially hidden underground, so it’s rare to see.

Overall, this mushroom is very unique and difficult to find. However, if you have a garden in Texas, you might have the conditions for one to grow.

The fragile dapperling fungus is very small and thin. It looks like a tiny, round, white flower when mature. It gets plenty of ripples, which many people can mistake for petals.

The outside of the mushroom is often pale white, although the inside can turn yellow, making it appear even more like a flower.

The fungus grows in the southern states and is common throughout southern Europe, Africa, and Australia.

So, suppose you see delicate white flowers in your garden that you don’t recall planting. In that case, they could be fragile dapperling mushrooms instead.

Marasmius mushrooms are actually 500 species in the Marasmiaceae family that look like flowers.

They are usually very small, but some can have bright colors similar to flowers. As they mature, they also become increasingly ridged, making them look more petal-like.

These mushrooms grow in areas with a lot of grass and form clusters and occasional fairy rings.

Lastly, geastrum mushrooms, or earthstars, are another fungus you may find in your garden. The mushroom grows underground before emerging and opening into a star shape. This shape is what makes it most resemble a flower.

As it matures, the edges droop more, making it look like it has petals. The inside of the mushroom contains a spore sac which can make it look more like the center of a real flower. Plus, the fungus can come in various colors depending on its species.

It’s not uncommon to find them in gardens all around the world. They’re not toxic, but you won’t want to eat them due to their bad texture and flavor.

While some mushrooms can look like flowers, the two species are in different categories. However, there are more than 2 million species of fungi on Earth, so it makes sense that some will look like other things.

Many mushrooms have colors and shapes that we associate with flowers. Plus, many mushrooms change shape when releasing spores, causing them to have “petals” that make them look more like flowers to us.

Although since fungi don’t use photosynthesis, you’ll never see leaves on these flower-like mushrooms, which can help you tell the difference.

In short, some mushrooms can share physical traits (size, color, and shape) with flowers. Since so many species of fungi are out there, you’ll occasionally find some that remind you of other plants.

Why are Mushrooms Growing in My Garden?

When you see a lot of mushrooms, that means there’s a lot of organic material in your garden that the mushrooms want to break down. They’ll break the material down quickly, making the soil even better for growing plants.

Periods of intense humid weather can also cause fungi to spread rapidly, even into gardens. As more mushrooms appear, they spread spores quickly. Spores that land in your garden are more likely to grow because the soil is in good condition.

Overall, if you see mushrooms growing in your garden, it just means that there’s a lot of organic material in the soil.

So, if you’re making your compost to use in gardening, you might have a more organic matter that mushrooms enjoy and need to grow.

What Should I Do If There are Mushrooms in My Garden?

If you find mushrooms in your garden, you probably won’t need to do anything to them. Most fungi will break down nutrients that your plants can then use. Mushrooms also mean that your soil is healthy and rich in food for your garden.

Mushrooms don’t last long and will go away on their own pretty quickly. However, you can still carefully remove them if you don’t like how they look in your garden.

Most mushrooms aren’t going to harm your plants and can even benefit your garden, so many gardeners don’t disturb them.

While some species of mushrooms are edible and can be used in cooking, others can be toxic and should not be consumed.

It is important to properly identify any mushrooms that are found in the garden and to use caution when handling or consuming them. Some tips for identifying and managing mushrooms in the garden include:

Overall, it is important to be aware of the potential presence of mushrooms in the garden and to use caution when handling or consuming them

What are the Laws About Building a Patio in California?

How To Prune Fruit Trees In The Winter? This article covers all the signs that your fruit expired, plus how long you can expect it to last. You must store your citrus fruits properly, so you’ll want to keep reading.