There are many species of backyard hummingbirds. In your garden, you’re most likely to see Ruby-throated hummingbirds and rufous hummingbirds. However, there are plenty more to see! Some also migrate during the year, making them available to different locations at different times.

Depending on where you live and what types of flowers you have in your garden, you’ll find different kinds of hummingbirds.

Many of these birds share physical traits, making it harder to identify them. You’ll want to review the eight most common hummingbirds to figure out what species is in your garden.

What Are the Most Common Hummingbirds?

Throughout the United States and Canada, the Ruby-throated hummingbird is the most common type.

You’re sure to see one when you set out red hummingbird feeders with fresh nectar. Although, you’ll also see other hummingbirds from time to time.

These are the eight most common hummingbirds:

Each of these birds has different traits that you can use to identify them. They also appear more frequently in certain areas.

After looking over these eight birds, you’ll have no issues figuring out which ones are in your garden!

1. How To Identify Ruby-Throated Hummingbirds

Ruby-Throated Hummingbirds are the most common hummingbirds to find in a garden. If you see hummingbirds, they’re likely this type. The male has a sparkling rub throat, greenback, and a forked tail.

Female ruby-throated hummingbirds don’t have a Ruby-Throat. However, they still have a greenback and a tail with a white band on them.

You can find these birds in the Eastern U.S. and Southern Canada. These birds love vibrant flowers, with their favorite being petunias, trumpet creepers, cardinal flowers, trumpet honeysuckle, and beebalm.

2. How To Identify Rufous Hummingbirds

Rufous hummingbirds are also very common in backyard gardens and found in every state in the U.S. They look very similar to ruby-throated hummingbirds.

Males have orange, shiny throats, while the females have white speckled throats. The females also have greenback and white tips on their tail feathers.

Rufous hummingbirds love flowers with tubes such as columbines, scarlet sage, and penstemons. They particularly love red flowers, so make sure to plant plenty of them if you want to attract them.

3. How To Identify Allen’s Hummingbirds

Allen’s hummingbirds are often in California and Mexico. They can appear in the Eastern United States, although somewhat less likely.

The male can have a throat color that falls anywhere between red-orange to yellow-orange. It’ll look a bit dustier than a Ruby-throated hummingbird’s color. These birds also have greenback and black-tipped tail feathers. The females are mostly brown and white.

Allen’s hummingbirds love gardens that have tubes, much like the Rufous hummingbirds. They prefer many of the same flowers.

As Allen Hummingbirds prefer tubes we recommend trying this Red Tube Hummingbird Feeder to attract them to your small garden. 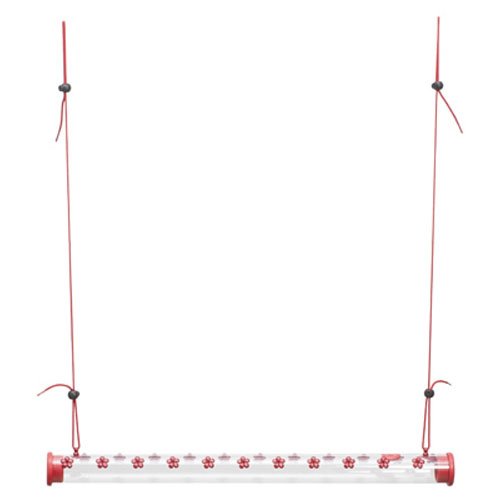 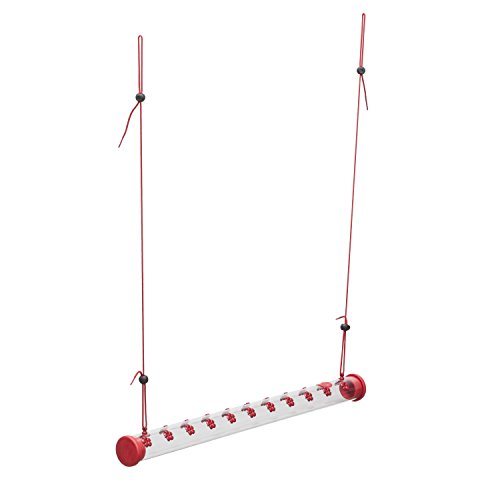 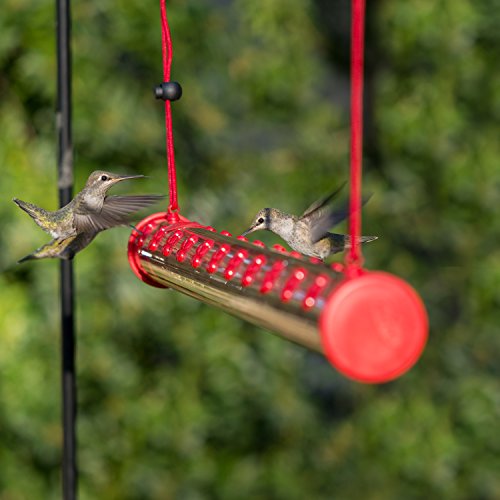 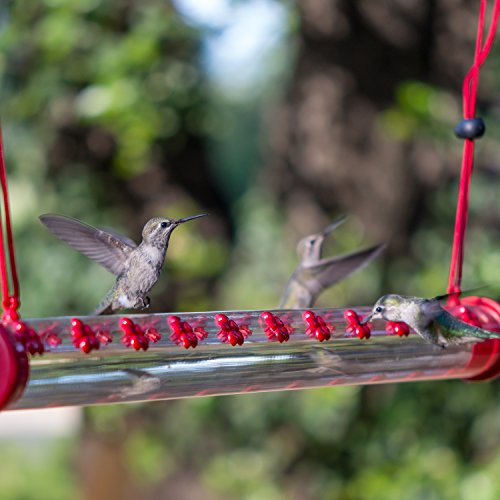 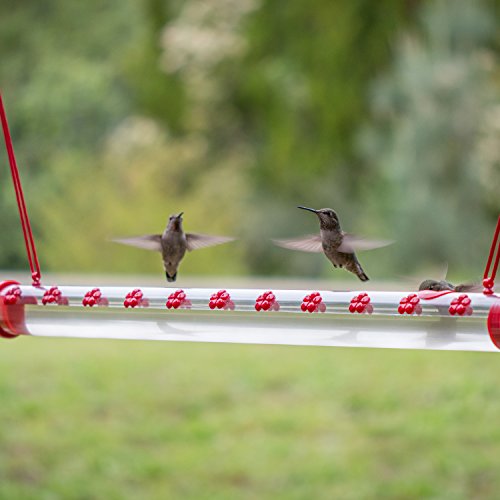 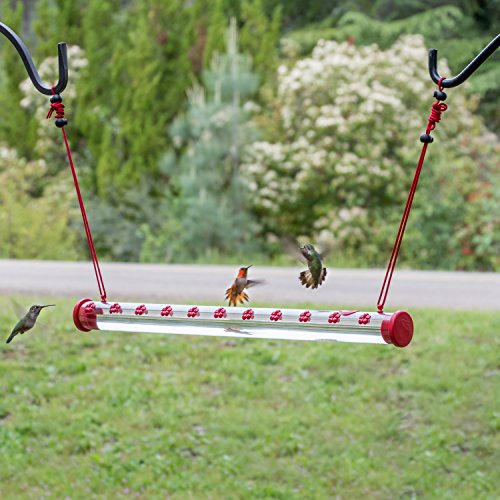 4. How To Identify Anna’s Hummingbirds

Anna’s hummingbirds are another species you’ll find along the west coast. However, they’ve slowly been moving East during recent years.

They’re very large (for hummingbirds) and territorial. The males will dive at other birds- sometimes people too! These hummingbirds are also the only ones in the U.S. who can sing. It’s a very sharp and scratchy sound.

The males have dark red throats and heads, looking purple in low lighting. The rest of their body is green and gray, while the females are light gray with white-tipped tails. They also may have some red spots on their throat.

These hummingbirds love the red gooseberry flowers the most.

5. How To Identify Blue-throated Hummingbirds

Blue-throated hummingbirds are very easy to identify. The males have gray-green bodies with a bright blue patch on their throats. The females look very similar to the males, except their throats are gray instead of blue.

You can find blue-throated hummingbirds in the southwestern United States. They have a shorter beak than other hummingbirds too.

These birds also love penstemons and petunias. Any red flower is likely to attract them.

6. How To Identify Broad-billed Hummingbirds

Broad-billed hummingbirds live primarily in Mexico but often make their way into the Southern U.S. However, it’s not impossible to find them in the Northern states.

These birds have a thicker bill than other hummingbirds. The male has a green-blue neck and stomach. His neck is usually bluer than his body, and there’s a black tip on the end of his beak.

Females look similar to males but have less saturated colors.

7. How To Identify Broad-tailed Hummingbirds

As they migrate, you can find broad-tailed hummingbirds in California, Mexico, and neighboring areas.

The male has a red throat with a white chest. They also have green backs and heads and their characteristic rounded tail feathers.

The females are paler and don’t have a red throat. The females also have black tails with white tips on them.

Suppose you want to attract this species to your garden. In that case, you should make sure that you plant plenty of penstemons, trumpet honeysuckles, bee balm, red hot poker, and salvia.

8. How To Identify Lucifer Hummingbirds

Lucifer hummingbirds have curved bills and large heads. They also feature a long forked tail, white next to the eyes, and a gray-green body.

The male has a magnet throat while the female has more rust coloration along her body.

These hummingbirds love to eat nectar from desert plants. Agave flowers are some of their favorites. Finally, the Lucifer hummingbird is most common in the Southern States.

What Are Hummingbirds Attracted to in a Garden?

Any brightly colored flowers that you plant could attract hummingbirds. You could also add a water source for them so that they return later for more food. Tubular flowers are usually the most attractive to hummingbirds.

Tubular flowers include columbines, bee balms, petunias, and hollyhocks. However, any bright red flowers can draw them in! It’s a good idea to use a nectar hummingbird feeder if you want to attract many birds. Why Are My Calathea Rattlesnake Leaves Curling?

Can Hummingbird Feeder Be Near Regular Bird Feeders? Are you tired of constantly worrying about deer munching on your beloved plants? Look no further! We’ve compiled a list of 7 deer-resistant perennial plants that will add beauty to your garden without the fear of being eaten. Keep reading to discover the best plants to deter those pesky deer. 7 Great Deer Resistant Perennial… How to stop chipmunks from digging up my garden

Chipmunks can be a cute addition to your backyard, but they can also cause damage to your garden by digging holes and tunnels. Find out here how to stop them…