How To Get Rid of Moles Without Using Harsh Chemicals?

If you have moles on your property, you don’t need to hurt them using harsh chemicals.

Instead, there are plenty of natural methods to get rid of moles:

Overall, there are many ways to deal with moles without hurting them!

All of the below methods drive away from the rodents humanely.

Why Should I Use Natural Methods To Repel Moles?

Moles are an essential part of our ecosystem!

However, they can cause damage to your yard if there are a lot of them.

You won’t want to apply harsh chemicals to your yard, especially around a garden.

The chemicals can seep into the earth, where your plants absorb them.

Plus, many chemicals kill the moles, which isn’t humane.

Instead – Dealing with the moles naturally is best! You won’t put your property at risk, and the moles should leave of their own accord.

How Do I Remove Moles Without Chemicals?

There are several ways to remove moles without having to use harsh chemicals.

If you enjoy gardening, making a few minor adjustments should make the moles leave.

Here’s what you can try.

You’ll see molehills pop up when you have a serious mole infestation in your yard.

They won’t be close to each other and look like a tiny volcano.

Castor oil is a great option.

Moles avoid it, so they’ll leave your yard if you apply it.

Next, you can remove the moles’ food sources.

They’ll look for it elsewhere and abandon your property if you do.

If you remove all of the insects, they’ll relocate. Moles don’t eat plants and are strictly carnivores, so you won’t have to uproot your garden.

To Kill the Grubs – You can add beneficial nematodes to your yard. Nematodes are tiny worms that release bacteria that kill yard grubs.

You can find beneficial nematodes in liquid solutions that spray on your yard.

While the nematodes won’t hurt the moles, they will kill grubs.

When all the insects underground are gone, the moles will have no choice but to leave your property.

Sonic spikes also don’t harm the moles but will drive them away.

You can find them easily at lawn and garden shops- and they’re straightforward to use! You need to put them on the ground and turn them on. 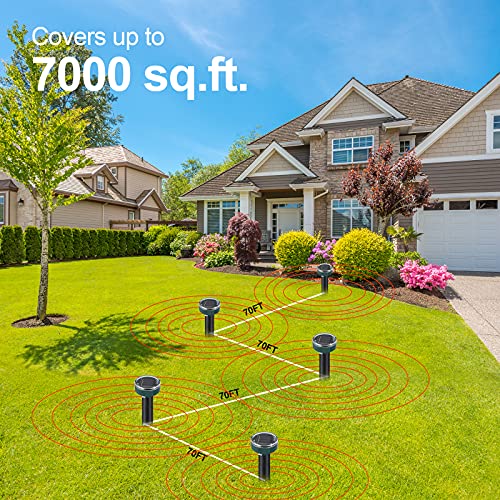 However, these emissions are extremely annoying to moles. The sounds cause the moles to retreat and avoid returning to areas with spikes.

You’ll want to make sure you have the sonic spikes spaced evenly around your property.

If you don’t, the moles could all move to one area in your yard, where they can’t hear the spikes.

Finally: If you’re going to try the sonic spikes, read reviews for the product online! You want to know it works well before purchasing it.

Additionally, you can plant flowers that moles hate!

If you already enjoy gardening, this won’t be too much hassle.

Moles dislike the way that daffodils and marigolds smell.

Planting these flowers around your property deters the moles while making your space more beautiful!

Moles are most active in the spring and summer, so you should have no problems planting these flowers.

If moles keep returning to your yard, there’s a reason!

If you can deal with it, they won’t keep coming back. It would be best if you didn’t have to use harsh chemicals.

There are two main reasons why moles love your yard:

However, you probably won’t want to cut down all your shade-providing trees!

Instead, deal with the moles by removing their food sources.

Even if the soil is perfect for them, they won’t stick around if they can’t find any food.

Can I Trap Moles?

You’ll only have one or two moles living on your property most of the time.

These creatures are very solitary and will avoid each other. That makes it possible to trap them and move them to a distant location humanely.

First – You’ll need to locate active tunnels. You can do this by pushing on the tunnels to flatten them. If they pop back up by the next day, that’s an active tunnel where moles pass through often.

A humane mole trap works by letting the mole in but not out.

You will need to dig up part of the ground where the tunnel is, place the trap inside, then check it in a day or two.

The mole will walk into the trap, where you can take it away.

When you release the mole, make sure it’s not near anyone else’s home!

There are plenty of natural methods to get rid of moles:

We recommend using a natural repellent such as Castor oil to get rid of moles effectively and safely. Can You Grow Different Vegetables in the Same Plot?

Is Molehill Soil Good for Your Garden?